To be fully prepared for the ISU World Figure Skating Championships 2021 we’re giving you the chance to educate yourself in what figure skating is about. In part 1 we’ll give you the history of this fantastic sport.

For thousands of years, ice skating was simply a means of getting across stretches of frozen water. The oldest known skate-like objects were used more than 20,000 years ago in the Netherlands. From there, the practice of attaching blades to boots “crossed the water” to northern Europe and the United Kingdom.
What we might today recognize as skates first appeared in Scandinavia about 3,000 years ago. The first skates were made from ribs and tibia of animals like elk, ox, and reindeer. It is not known exactly when metal blades began to be used, but there is a lot of evidence to suggest that steel blades were used in the Netherlands as early as the 14th century.
Ice skating has been a recreational pursuit for men and women on Dutch canals since the Middle Ages. Skating on frozen lakes and marshes became popular in the United Kingdom in the 17th century and the first skating club was established in Edinburgh, Scotland, in 1742. Two years earlier, the British took skating to North America. And skating was also popular in the French royal court, where Marie-Antoinette herself donned skates and hit the ice. It was not until the 20th century that the jagged teeth, called toe picks, at the front of skate blades – so distinctive of figure skating – were added. These gave skaters better grip and paved the way for what we know as figure skating today.

How do you think figure skating has developed over the last 100+ years?

See for yourself at this video: https://www.youtube.com/watch?v=wZwCYwhvmjY 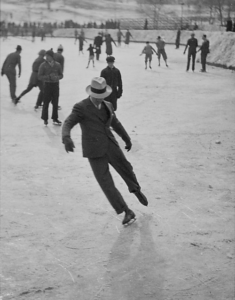