“Daring to dream took me to the World Championships”

“It was a special feeling to take the tram to the arena and see yourself on all the posters around town. And to then be on the ice in a packed Scandinavium was totally magical. It was a fantastic World Championships, with wonderful spectators and a great atmosphere,” says Kristoffer.

“It’s great that the World Championships are being held in Sweden again and the Ericsson Globe is a really nice arena! Even though Sweden is a small country, we’ve hosted lots of major Championships and have done it extremely well. The 2021 World Championships will of course be very different because of the pandemic, but it’ll still be great fun to have world stars here and watch on TV.”

Kristoffer hung up his skates 10 years ago after a successful figure skating career. He competed among the world’s best for many years and figure skating has given him so much.

“My trainer, Andrea Dohany, taught me to dare to dream and go my own way. Over the years, I’ve worked hard, learnt to never give up, and to always see opportunities. This helps me study, in work, and in my private life.”

Kristoffer started skating at the age of five. And he was drawn to figure skating for many reasons. At first, he mostly liked working on his technique and learning new things all the time. But as time went on, he liked the artistic side of the sport more and more – skating to music and creating art.

“Just like every other elite sport, figure skating is very demanding. For me, figure skating is an extremely multi-faceted sport. It requires different abilities such as resilience, grace, and especially physical and mental strength.”

Kristoffer made his World Championships debut in 2001 and it made a powerful impression on him.

“The coolest thing was probably when I did the performance of my life in Tokyo 2007 and got a standing ovation – I’ll never forget it.”

You can see his performance at the World Championships 2007 in Tokyo here. 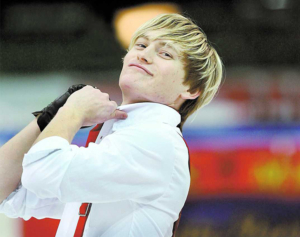 Age: 38; and lives in Gothenburg

Health and safety is our top priority Scroll to top